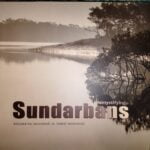 A bottle of Bohphool Natural Mangrove Honey of 490 gram will be delivered free with this book.

The book “Demystifying Sundarbans” depicts one of the UNESCO world heritage properties of West Bengal, and literally demystifies the only mangrove tiger-land on this planet. Its needless to say that it will be of interest to those who have been to, have heard about, or have planned to see this extremely unique natural system of Sundarbans of both India and Bangladesh. The book has 200pages, hard bound with a jacket. Its pages are 170GSM matt-finish art paper and is priced Rs. 3000/- (Rupees Three Thousand). The authors of the book are Basudeb Pal Majumdar, a renowned wildlife photographer and Dr. Subrat Mukherjee IFS, who served Sundarban as deputy and field director for eight long years and voluntarily contributed to the book for the sake of conservation.

Part of sale earned from this book will be shared with the traditional honey collectors of Bohphool.

A bottle of Bohphool Natural Mangrove Honey of 490 gram will be delivered free with this book.

Sundarban has always defined ‘mysterious’, as it has largely remained unknown, undiscovered, not studied and over and above, an intriguing system that is largely misunderstood. And human psychology tends to identify anything unknown as mysterious. Difficult terrain, muddy ground surface, protruding mangrove roots, tiger, snake and crocodile in the land and water, further coupled with prohibitive high cost of watercraft and security issues, make this ecosystem difficult for study.

The authors have tried to make presentation interesting and understandable, for all those who find interest in Sundarban and hope that this book will create the same interest among others. The Tiger was always in their mind as it is inseparable and indistinguishable from Sundarbans and so it gets more space in the book.

The authors of the book are Basudeb Pal Majumdar, a renowned wildlife photographer and Dr. Subrat Mukherjee IFS, who served Sundarban as deputy and field director for eight long years and voluntarily contributed to the book for the sake of conservation.

Dr. Subrat Mukhrjee is an IFS officer of 1985 batch with 35 years of his life as a forester. He got the opportunity to work in the Sundarban Tiger Reserve as Deputy Field Director during 1998-2002 and as the Field Director during 2008-2012, thus have a long experience in the Sundarban Tiger Reserve. His Ph.D. thesis is the first academic insight on management of Sundarban Tiger Reserve, encompassing varied studies on the Ecology of this ecosystem. He is a mix of Protected Area Manager and a Researcher. He has the eye to see things in a wide range of perspective. His endeavours of establishing land based camps is deltaic & marine ecosystem of Sundarbans, in Dobanki, Kendo and Chamta etc. is a strategic & difficult management decision which helped in protection of Sundarbans, by establishment of well distributed network of protection Camps. Nylon net fencing along the forest boundary of Sundarban is another important work implemented by him which reduced tiger straying in the villages and in return reduced human and tiger deaths. Both of above works can be repeated in Bangladesh part as it has given good conservation dividends to Indian Sundarbans. His efforts have received recognition from both Non government and Government sectors.

He has bears awarded

National Tiger Conservation Authority’s Award for Excellence in the category of “Management of Human-Tiger Conflict” (for the year 2010-11).
David Shepherd Award for wildlife conservation in 2003 for controlling illegal wildlife trade.
Awarded for Environmental Management of the State of West Bengal, 2018 by Government of India.

Mr. Mukherjee is a Member of IUCN- Cat Specialists Group under Species Survival Commission Programme of IUCN since2008.

He is also a WCPA member in IUCN.

Part of sale earned from this book will be shared with the traditional honey collectors of Bohphool.

There are no reviews yet.

No products in the cart.